The Girl With The (Almost) Three-Legged Cat 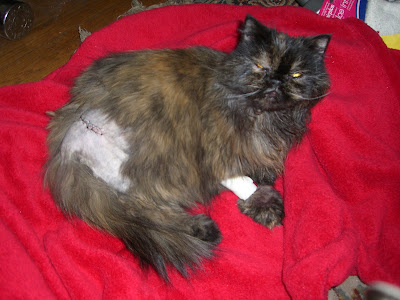 Just a few years ago, an extremely successful novel by Dan Brown called The DaVinci Code moved from hardcover to paperback to an upcoming feature film starring Tom Hanks and directed by Ron Howard. At the time, everyone seemed to have read this book, even people who claimed they never read books, but I managed to hold out for the paperback edition, which was a long time coming. I thought I was the last person in the world to read the book, and while enjoyed it, I quickly moved on to the paperback edition of Angels and Demons, which I felt was much superior.

US Weekly magazine has a delightful regular feature called "Stars--They're Just Like Us!" wherein humorous captions are applied to photos of celebrities going about the mundane business of filling their gas tanks, shopping at Target, or pulling parking tickets out from under expensive windshield wipers. It is definitely the guiltiest of pleasures, and remains the only reason I sometimes miss working at a salon that subscribes to US Weekly. In any event, months after I had completed my own delayed read of Dan Brown's breakthrough novel, a picture of actor Toby Maguire--wearing sunglasses and a baseball cap and probably walking to his car in Silverlake, holding a copy of The DaVinci Code--appeared in the "Stars--They're Just Like Us!" section, with an arrow pointing to the book and the caption "Better Late Than Never!"

Even now, I still laugh when I think of this photo. Don't ask me why.

This is a long way of getting to the news that I am now reading The Girl With The Dragon Tattoo (on Kindle Library Loan), and *loving* it, approximately six years after everyone else in the world has read it. I am racing to complete it: A) before my library loan expires in two days, and B) before I allow myself to see the David Fincher film starring Daniel Craig, who is another of my celebrity crushes.

I apologize for being away from my blog for a couple of weeks; my beloved cat Kiki (pictured above) became seriously ill, and I was unfortunately occupied with daily vet visits and all-consuming grief. There is a non-cancerous growth on a nerve cluster in her right hip that is causing her extreme pain, which is now being managed by steroids and pain meds. Further biopsy results are due next Thursday, then I suppose a plan can be made for either surgery or longterm pain management.

In any event, life as I knew it ended two weeks ago with Kiki's illness: what followed were many days of tears and confusion, and times when, groggy after four hours' sleep, I would wake up to a vet calling to ask if I'd like to have Kiki's leg amputated now, or after a biopsy. I chose the biopsy first, and things have lately returned to as close to normal as I could have hoped, even a week ago: Kiki is using the litterbox on her own, is eating and drinking, is walking around and meowing and purring when she wants attention. She is as close to her "normal" self as she has been in two weeks, and has gone right back to being at home after almost a week in the hospital. I know this might just be a charmed interlude--her nerve growth isn't going away, and while we might be able to control its size with steroids and its effects with pain meds, it'll be something we have to deal with for however much time she has left (she just turned 16, but please don't tell me how long a life that is for a cat (their lifespan can be from 18-23 years), or ask how much longer I could have expected her to live; I know you mean well by saying these things, but I don't want to hear it. I can't *not* try to help her get better/stay alive, we're not yet at a point of complete system failure. And just like Lorelei Gilmore often said of her daughter Rory, Kiki "is special," like a cat/angel hybrid).

Now that Kiki is more stable, I will be able to get back to my routine and do things like keep up with this blog. I am looking forward to a quiet Christmas week (had to cancel my trip home, to take care of Kiki) where I will be able to indulge in several movie matinees like Mission: Impossible, Sherlock Holmes, Young Adult and Hugo. And Twilight: Breaking Dawn!!!! In fact, I think my next post will be a review of Twilight...

Okay--hope this catches everyone up and maintains their interest in this blog! OH--I do have some publication news: two of my stories will be published in the next two issues of Storylandia: The Wapshott Journal of Fiction http://www.storylandia.wapshottpress.com/

Talk to you soon,
--P
Posted by Paullette Gaudet at 8:30 PM No comments:

Life Does NOT Include Jeremy Renner


I tried to post a permissioned-photo of Mr. Renner on this blog, but it didn't work out...it took over everything! Will have to hope that all y'all already know what he looks like--he's still a super-fox, and my first pick to play Pieter in the movie of my book, Biloxi Suite Trapeze.

I am at the climax of my book!!! This probably sounds a lot more exciting than it actually is, and is actually causing me a lot of stress.While I do have a concrete endpoint for my novel--i.e. the last scene--I don't actually know what happens between now and then, so every day is an "adventure" (i.e. stress-fest), and the demand of producing daily pages is seriously cutting into my karaoke time. Karaoke is fantastic, because you get to both sing, and the lyrics magically appear before you on the teleprompter. Writing, on the other hand, involves an iTunes soundtrack (Muse, for me right now, since that worked for Stephenie Meyer, and they do kinda rock) and a bunch of sitting around typing in sweatpants. Not the sort of thing Kate Hudson would find sexy, to go with our Muse analogy.

I am writing, and neglecting my dishes, and hoping to wrap this book up in an imaginative way....
Posted by Paullette Gaudet at 12:36 AM No comments:

Is That All There Is, Or Might Life Contain Jeremy Renner?

Oh, my god this blog is boring...I know its main function is to provide access to my story publication info and/or reading appearances, but come on--as Peggy Lee once sang: "Is That All There Is?"

I just completed Hugo House's ten-week "Master Class in Prose," (as chronicled by my friend/fellow MFA survivor Elissa Washuta, here: http://hugohouse.org/blogs/elissa-washuta) and several of my fellow students have committed to an informal writing group where we'll continue workshopping each other's writing.We're taking a poll to see what times/dates/venues work for everyone, and this made me think I should perhaps do something similar to decide which direction my blog should take.I really can't let it be the free-for-all gossip fest I'd like it to be (at least not until everyone I know dies, and/or I don't need a day job anymore), so that leaves the topics of:

1) Crippling Self-Doubt (I'm never going to finish my book, and even if I do it's gooing to suck)

2) Persian Cats (They are perfection! Although...I really don't care about them outside of my own cat, Kiki)

3) My Jeremy Renner Obsession (For those new to this blog/my life: every three months I have a different Celebrity Crush, some unattainable young buck who has caught my fancy for some reason or other and keeps me up at night. J. Renner held that position this time last year, and has come back to make history as the first "Paullette Gaudet Celebrity Crush Returnee," just in time for his December release of Mission Impossible: 4? 5? Am not sure what number they are up to now, but all you need to know that it is in theaters around Xmas and features Jeremy Renner.

Where were we? Oh yes, you should vote, if you are visiting this blog. The writing/publishing info is going ri remain, but am seriously trying to decide if I should also include book reviews and cyclical celebrity obsessions along with.

Vote below, in the Comments Section!!!
Posted by Paullette Gaudet at 6:40 PM 5 comments:

Here are a couple links to the reading gigs I did last year: I read "The Deepest Crease Visible," a short story about an upscale nudist colony in Malibu, Ca, at Hugo House's Cheap Beer & Prose in Sept 2010, then read an excerpt of my short story "Celebrity Sperm Bank" (published in The Ledge Magazine No.33, http://www.theledgemagazine.com/current%20issue.html) at Sole Repair, for the Off Hours Spring Reading hosted by Peter Mountford in April 2011.
Posted by Paullette Gaudet at 9:22 PM No comments:

Hello faithful readers, I know a new post has been a long time coming--since my last update in 2010, I've gotten a new computer (Dell laptop, courtesy of Chris Rogers), and experienced the wonder of cable/wireless internet! Yes, I was a dial-up user until very recently with my old iMac, part of the reason it's been so long since my last update.

Well, a lot has happened in the past year--in addition to my personal technological advances, I was a featured reader at last fall's Cheap Beer & Prose at Hugo House, and read at the Spring Off Hours Reading at Sole Repair in April 2011. I recently received a 2011 GAP grant from Artist Trust to help finish work on my debut novel, Biloxi Suite Trapeze, a mainstream romantic comedy about a troupe of Eastern-European acrobats at a ritzy Gulf Coast casino hotel. I am 100K words into this work and hope to have a clean draft by December 2011; The Artist Trust grant is allowing me to take some time off work at Rudy's Barbershop to finish my novel. I was also the lucky recipient of a scholarship to take the 10-week Fall Master Class in Prose at Hugo House taught by author Peter Mountford (A Young Man's Guide To Late Capitalism), so will finish that up in a couple weeks. It's been a fantastic--if slightly grueling--course in novel writing with a bunch of talented writers who have provided invaluable input  in every workshop: seriously, such a great group of writers, couldn't have asked for a better experience. My UW MFA classmate, Elissa Washuta, is also attending the Master Class and blogging about it on Hugo House's site: http://hugohouse.org/blog/2011/nov/master-class-fiction-week-7-elissa-too-busy-write-because-shes-blogging-and-watching-t

So things have been good--while I'm still cutting hair part-time to pay the bills, I have been working full-time on my novel and also sending out short stories for publication.Oh, I did have some successs there--my short story, "Celebrity Sperm Bank" was published in The Ledge Magazine No. 33: http://www.theledgemagazine.com/current%20issue.html

I guess that's all from my end right now--I'm on Twitter, @PaulletteGaudet, and have a Facebook page. Being busy with writing class on Monday nights has cut into my Salsa dancing, so I am behind on that, but miss it greatly. My good friends Talia and Nancy keep me up-to-date on the salsa world, but I aching to actually get out there and dance myself.

Well, I promise to be a better blogger in future, none of this taking a year off! Hopefully my life will be interesting enough to warrant regular updates,
xoxo-P
Posted by Paullette Gaudet at 9:09 PM No comments: